The biggest nativity scene in Portugal

It was on December 1st that the largest nativity scene in the country was opened to the public in Vila Real de Santo António.

This initiative, which is now in its 19th edition, opened to the public on December 1st and has around 5600 pieces. It took 40 days and 2500 hours of work to bring this to life. The list of materials used was thought out in detail giving priority to ecological materials (natural or reused) with emphasis on cork and moss. 20 tons of sand, 4 tons of stone dust, 3000 kg of cork and hundreds of ornaments were also used. All this
contributed to the 230 square meters of exhibition at Centro Cultural António Aleixo.

Many of the figures were made from scratch by Augusto Rosa and Teresa Marques, employees of the municipality and who count with the help of Joaquim Soares and António Bartolomeu.

The structure once again has evocative elements of the region, namely the Praça Marquês de Pombal, the old huts on the beach of Monte Gordo, the salt pans, the traditional Algarvian mills, as well as other local monuments. According to the organizers, «more than 80 animated and motorized pieces, the lakes and the lighting constitute «the secret» of the event are, simultaneously, some of the most attractive points. All of this is based on a complex support base where the various kilometers of cables that bring this work of art to life and guarantee, for example, the circulation of water, the lighting of houses and scenic effects'.
These details are added to the reconstitution of many Christian and pagan episodes associated with the Christmas season – shown in the nativity scene -,"factors that distinguish it from all others in the country and are one of the reasons for its success." 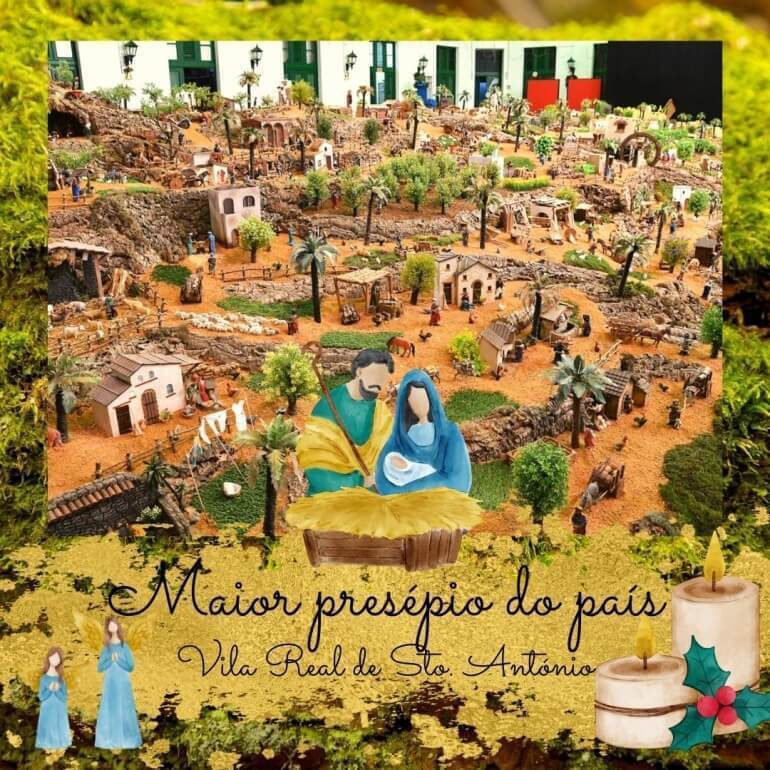